As Polonius suggests in Shakespeare’s Hamlet, “Apparel oft proclaims the man”–telling us everything about someone’s taste, social status, and character. A movie’s costume designer must do even more–completely convincing us an imaginary world is real. Whether we are watching an intimate family scene among members of the British royal family at Buckingham Palace in 1950s London, or witnessing brave men with broad swords on a battlefield fighting to retake the 8000-year-old Winterfell castle from the nefarious bastard lord Ramsay Bolton.

Long before the pilot for Game of Thrones was shot in October 2009—after nearly three years in development at HBO—the showrunners recruited Michele Clapton, at the time known mostly as the costume designer for a string of BBC period dramas, including Jane Austen’s Sense & Sensibility & The Diary of Anne Frank. It was an absolutely brilliant choice.

As GoT‘s 7th Season begins, MONROWE recalls our conversation with Clapton last summer as she mused about what her life might be after Westeros, her British fashion favorites, and the complex challenges of Netflix history epic The Crown which will air its second season this fall. 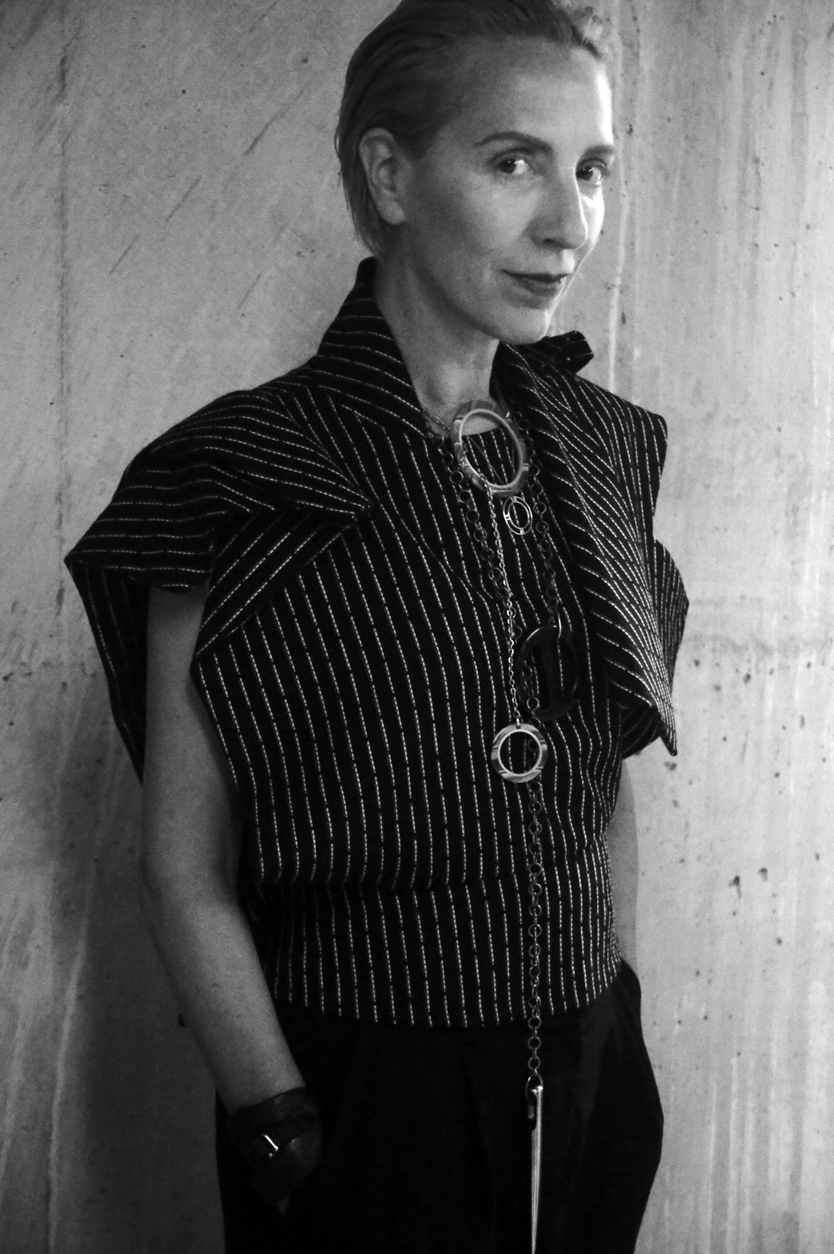 Guy Lesser: I realize how often you’re asked about “Game of Thrones,” so I thought I’d ask you about “The Crown.”

Michele Clapton: It’s strange actually because I agreed to do it—I think in September [2014], the year before [shooting began]—when Stephen Daldry [“The Crown’s” director] called to ask me.

I was thinking about leaving “Game of Thrones” because I really wanted to be back in London. But then in between I actually went off to do a film in Azerbaijan with Asif Kapadia. It was a lovely, interesting place, but shooting there was so hard, and it ran over by five weeks. Luckily, my crew had already started and quite a lot of the research in place.

The joy of “The Crown” was that if we got the public stuff right, especially the wedding and the coronation–which we replicated as well as we could—we would then have artistic license telling the story of what happened behind the scenes. That was the pay-off. And we had great fun creating the characters from documents and whatever we could surmise about them. So, “The Crown” really has two halves—one that is absolutely correct, and the other which is what we imagined.

GL: Tell me what you imagined.

MC: Everything I’ve read about Princess Margaret suggests she loved clothes. Everything looks like it’s been fitted, and fitted again. I think the Queen wore clothes because it was her duty. I don’t know if that’s true, but we played up Margaret as racy and fun. And then Wallis Simpson was great to do.

GL: I actually own a copy of the lavishly illustrated 2-volume catalogue of Sotheby’s 1997 Duke and Duchess Windsor sale.

MC: One of the actors brought it in—it was wonderful. It was also really interesting to actually go and find original pieces. A friend of mine has five or six pieces of Queen Mary’s with all the little forget-me-nots and her little biscuit pockets or whatever they were for. And then we went to Bath to look at the dress she’d worn to the wedding—which had been altered quite substantially since. But it was very strange for me to do something which had to be historically correct after working on “Games of Thrones.”

GL: Can you actually remember doing anything before “Game of Thrones”?

MC: I always make sure I do something in the down time so I won’t get too caught up in fantasy forever. But I love that I can be a complete magpie when I’m doing it, steal from the renaissance and middle ages, and trawl across everywhere. It has to make sense, and have a semblance of realness, but the question is how can I tell a story, draw the characters, and give them a life, so that people will accept them.

GL: I have to say that the world you’ve created in “Game of Thrones” is remarkably convincing.

MC: When we first started, of course I read some of George R.R. Martin’s books, who actually gives a lot of costume descriptions. But when we did the pilot we realized we really didn’t want to do it the way it was written. Many fantasy pieces I’d seen in the past didn’t make sense. The armor doesn’t fit properly, the colors are wrong, and it grates on me. It was interesting to make “Game of Thrones” much more realistic. Not, “Oh I fancy a bit of red here, or a bit of green there.” But, What was the climate? Was there trade? What dyes were available? I try to design from there, really. And I think it makes it work better to have rules and structure, and a framework of the place that gives you a basis you can then flesh out with pieces for each character.

GL: And once the geography is settled?

MC: Color for me is a key into character. Often the first craft person I employ is a dyer, who I’ll ask to create a specific range of shades for me to ‘play’ with. Then I make color charts of each character and shift them constantly trying to find a pleasing balance. I also make a beeline for the production designer and look at sets and color ideas. Although very few designers do both costumes and sets, I think their results can be marvelous, so I try to emulate this by being close to the production designer and interacting as much as possible.

On “The Crown” this part of the process was so exciting and productive—I adore those lovely chalky 50s colors along with deep saturated silks and sparkling jewels. And it was a treat to see all this playing against a backdrop of leaky palace rooms full of gilt, ancestral paintings, and Victorian furniture. I’m not an illustrator, but I like to explore the design by drawing, and try to create an attitude, a silhouette. I’m quiet technical in my thinking of how something should be cut. This comes from my cutting back ground.

GL: In some past conversations you’ve often spoken about “fittings.”

MC: I’m incredibly aware of body shape, and I can usually size someone up on a look and see what shape will work. I also can usually tell someone’s shoe size from a glance. Weird, but useful. On one film–shot in a small town near the Sahara desert in Morocco—we were waiting for an actor who I hadn’t met. He had sent his measurements so we could arrange all his European costumes. Finally, around 10pm, a car pulled up, and out he fell. . . much the worse for wear! We were to film him early the next day, and instantly even in the gloom I knew that none of our costumes would fit him.

First fittings used to terrify me, since there is often so much at stake. But now I’m usually pretty calm. Since the costume designer is often the first person an actor will meet on a project, I will have researched the character, know the relevant period etc.—but with experience I have found that it is best not to overthink it, not to push ideas too soon, to listen and be open. If the relationship works, it’s actually quite intense and very personal, and both of us reap the rewards. But after this accelerated, strangely intimate exploration of self and ideas, the actor moves on to the filming and their relationship becomes more intimate with the filming crew, while I move on to create new characters.

GL: You’ve also often said how much you love looking at fashion. And that it too is typically among your “reference” material.

MC: Yes, I look everywhere. But of course I have always loved Galliano and McQueen—I adore the way they show, and their cutting is witty and clever. I also should include Vivianne Westwood, whose clothes are more than just clothes, they are an attitude, a statement. She has revolutionized fashion in the UK. And with Galliano and McQueen, her inventive, unorthodox cutting has reinvented the way clothes are worn.

GL: As something of a “fashion shoot” did you have fun with what you did for us?

MC: It was really interesting to take the garments out of the story of “Game of Thrones.” And use them on a fashionable young woman. Actually, I thought they worked incredibly well. They were pretty timeless.

GL: What about fashion from “The Crown” era?

MC: I love costumes from the 30s and 50s—Madame Grès, Schiaparelli, and Dior of course. In “The Crown,” I love the style of Wallis Simpson. Lia Williams who plays her was amazing to work with, and she completely inhabited Wallis—it was thrilling, and we both adored creating her. It was important for me to not just copy Wallis’s costumes, but to find the essence of them, the wit. One or two were close to the originals, but the rest were not. Though I hope there is a sense that they might have been. I was also totally inspired by Mrs Sutherland [whose husband painted a famous Winston Churchill portrait].

GL: There’s a fantastic photograph of Mrs Sutherland wearing an enormous silk scarf pinned with a broach, walking between Churchill and her husband in a garden in winter.

MC: The arrangement of that incredible scarf—it said so much. Sometimes an item of clothing or jewelry can express so much that cannot be said.