As the understudy for Rodolpho, playing a bit part in Gregory Mosher’s 2010 revival of Arthur Miller’s “A View From the Bridge”—starring Liev Schreiber and Scarlett Johansson in her Broadway debut—Morgan Spector thought he had it good. Or did, until the morning he heard the actor cast as Rodolpho had been injured, and he’d be taking his place that night. Spector not only proved himself, remaining in the part, but launched a career that has combined memorable performances on stage, in feature films and television (including “Broadway Empire,” “Orange is the New Black” and “The Mist” an upcoming Stephen King psychological thriller). Spector sat down with Monrowe to discuss the physical magic he finds in words, whether monogamy might be one of those ideas designed to fail, and Brian Crano’s sly romantic comedy “Permission”—premiering this weekend at the Tribeca Film Festival—in which he stars opposite his wife, Rebecca Hall.

Ricky Kim: What attracts you to roles on stage and on film?


Morgan Spector: It’s always the writing. I think I get attracted to language that has muscularity — a rhythm and dynamism — and, on a simple level, something in it that is going to be a pleasure to speak aloud in a space. The thing I’m attracted to is something that feels real, no matter what’s happening in it, something that doesn’t violate the reader’s sense of what it is to be alive right now. Once that’s there, it’s the question of, “is this about anything?” Does this person have anything to say? Does this person have something I want to be a part of and amplify into the world?

RK: We’ve heard that you tried to quit acting a few times early on in your career. What prevented you from doing so?

MS: There are moments when you are starting out and it doesn’t seem like it’s going to happen. In 2008, I couldn’t work – I didn’t audition for a year. I thought about law school a few times. I then gave up on the whole idea and thought this is still the only thing [acting] I really want. I think everyone has their level of tolerance, to struggle to attempt to be what they want to be. I got lucky in that I started getting some positive feedback in the industry before I reached my personal limit. 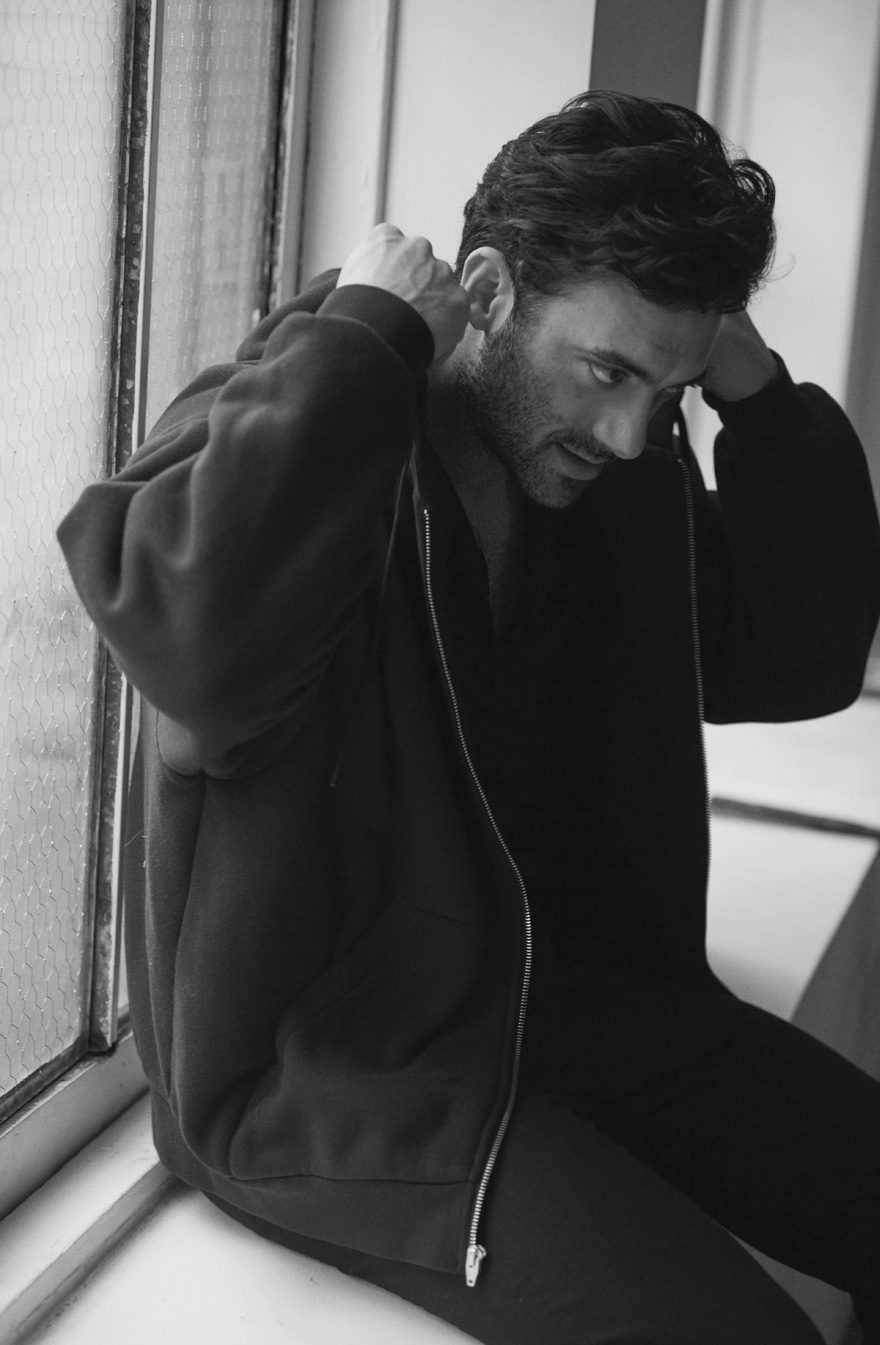 RK: What was your backup plan?

MS: Right now it’s more like – what else can I do in this business and industry that would be fulfilling? What else might I be good at, what might I be useful doing? There’s a point where you have the luxury of writers sending you scripts. Lately, I’ve been helping my wife, who is directing a short film sometime this summer. I’ve been helping produce under the guidance of Margot Hand. Also, I’ve been working with a friend of mine who’s producing a doc on socialism in America post 2016 Bernie Sanders success. 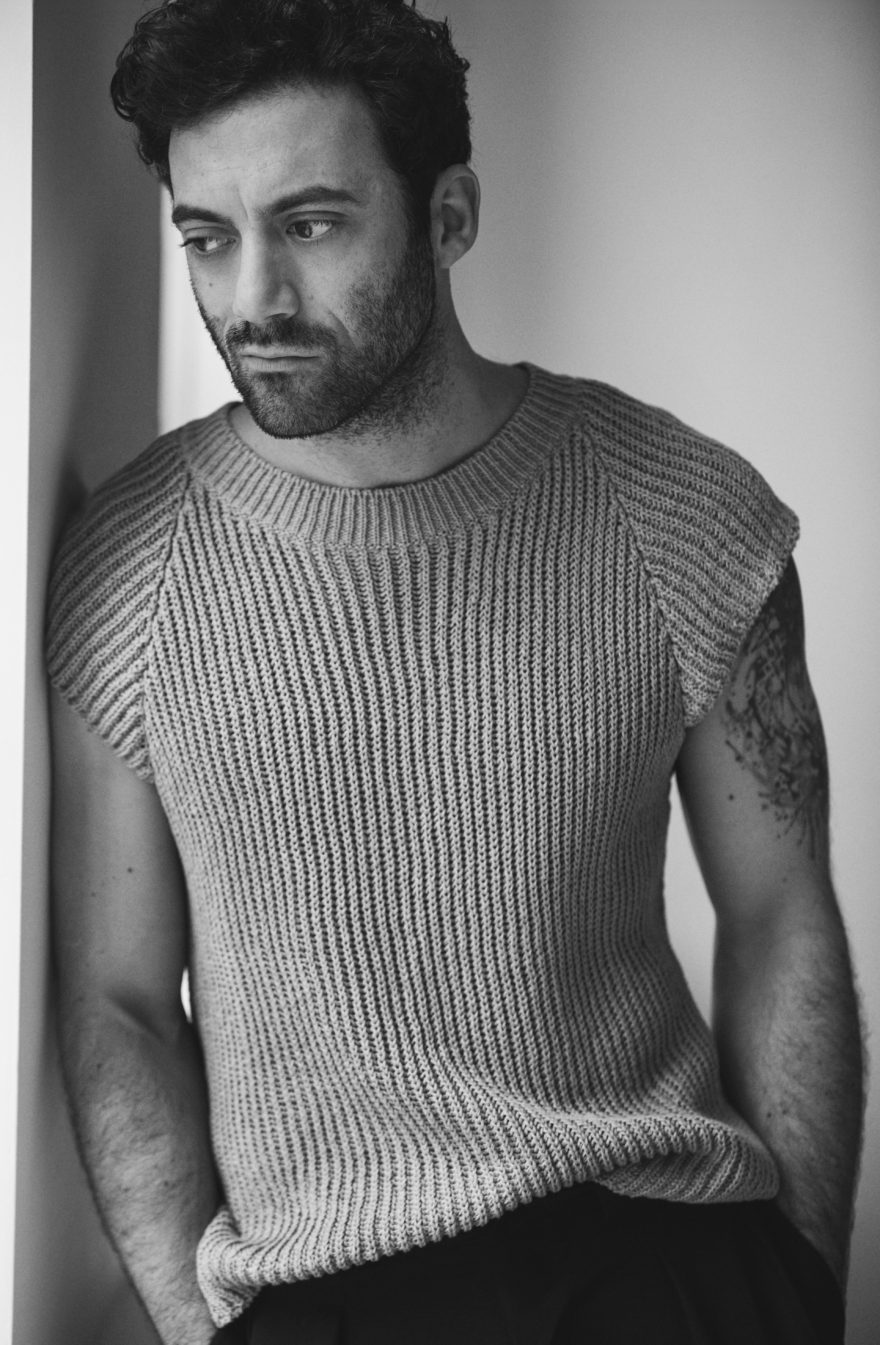 RK: What is it like working so frequently with your wife, Rebecca Hall, especially in films as harrowing as Christine in which she plays the tragic lead or, more recently, Permission?

MS: Weirdly, it’s how we met – on Broadway a few years ago. The first thing I learned about her was, what an incredible leader she is, which is true on stage and film. She has this kinda brilliant analytical skill when it comes to text, but has a complete ability to abandon this part of her mind and immerse herself in an imaginative environment. Just as one actor to another, it’s a real privilege to work with her. Also, for two people that work a fair bit, it’s also a way of knowing where each of us is going to be for a little while, which is nice [laughs]. Permission, we only had a couple of scenes together. I enjoy having that convention of camaraderie in creative ensembles; I like being part of that with her. 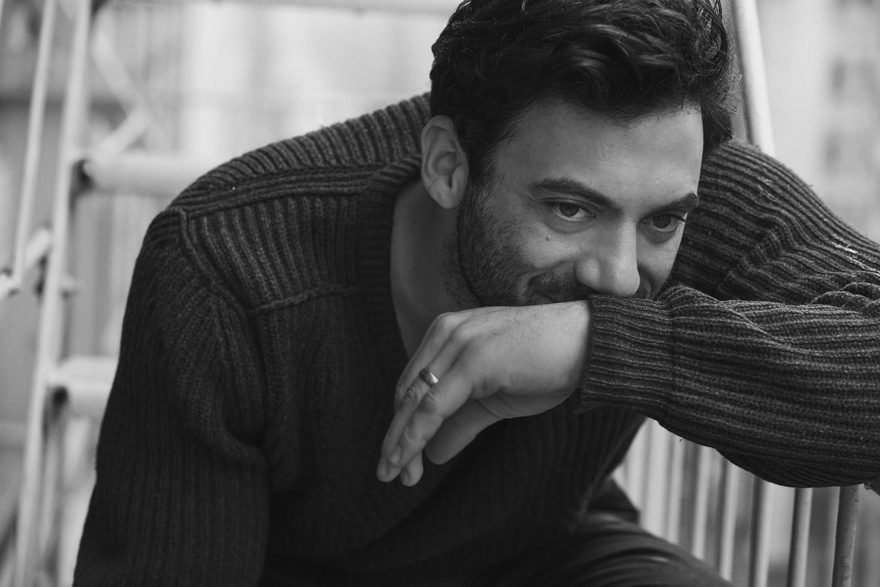 RK: Stephen King’s The Mist. What can you tell us about it?

MS: There’s this sense of – it’s a horror story and very effective and it’s terrifying and reads like a dream. It has this quality of a Greek myth, which is the sort of thing our show runner really responds to. This sense of a civilization or microcosm which is beset by mysterious evil, so it doesn’t understand the ways in which fear inspires a breakdown in society that sort of reveals the fissures between various social strata or communities.

RK: How do you think the themes present in The Mist relate to current events?

MS: Sorta the obvious one, if you look at our politics. We’re living in a time when our politicians, which the documentarian Adam Curtis has pointed out, don’t offer us positive visions of the future. They offer us protection from the postulated terrors that are coming our way. It is a way of manipulating massive bodies of people. I think we can all see that it’s been very effective from the last [presidential] campaign. The person that said immigrants are destroying America and terrorists are the greatest threat to the country, despite the fact that you’re more likely to be struck by lightning. Since 9/11, we’ve been living under a political regime that has used the threat of terrorism to justify a whole variety of violations….

MS: It is…. It is wild right now. I thought that living through the Bush years, I had seen how ugly things can get, but I haven’t.

RK: In Chuck, you star opposite Liev Schreiber. It’s a biopic of boxer Chuck Wepner, the man who inspired the film, Rocky. How did you prepare for the part of Sylvester Stallone?

MS: The thing I was interested in for that role was the difference between our version — our perception— of Stallone, the man, and our perception of Stallone as Rocky. That’s one of those roles that is so iconic that when people think of Stallone, they think of Rocky. There was that need to sort of find a fighter’s stance—I watched a bunch of movies, I looked at all the footage that I could—but mostly I watched him in interviews. He was a very flamboyant dresser in the ‘70s and ‘80s—he looked more like a dancer than anything else. He comes across as an artist or a renaissance man. 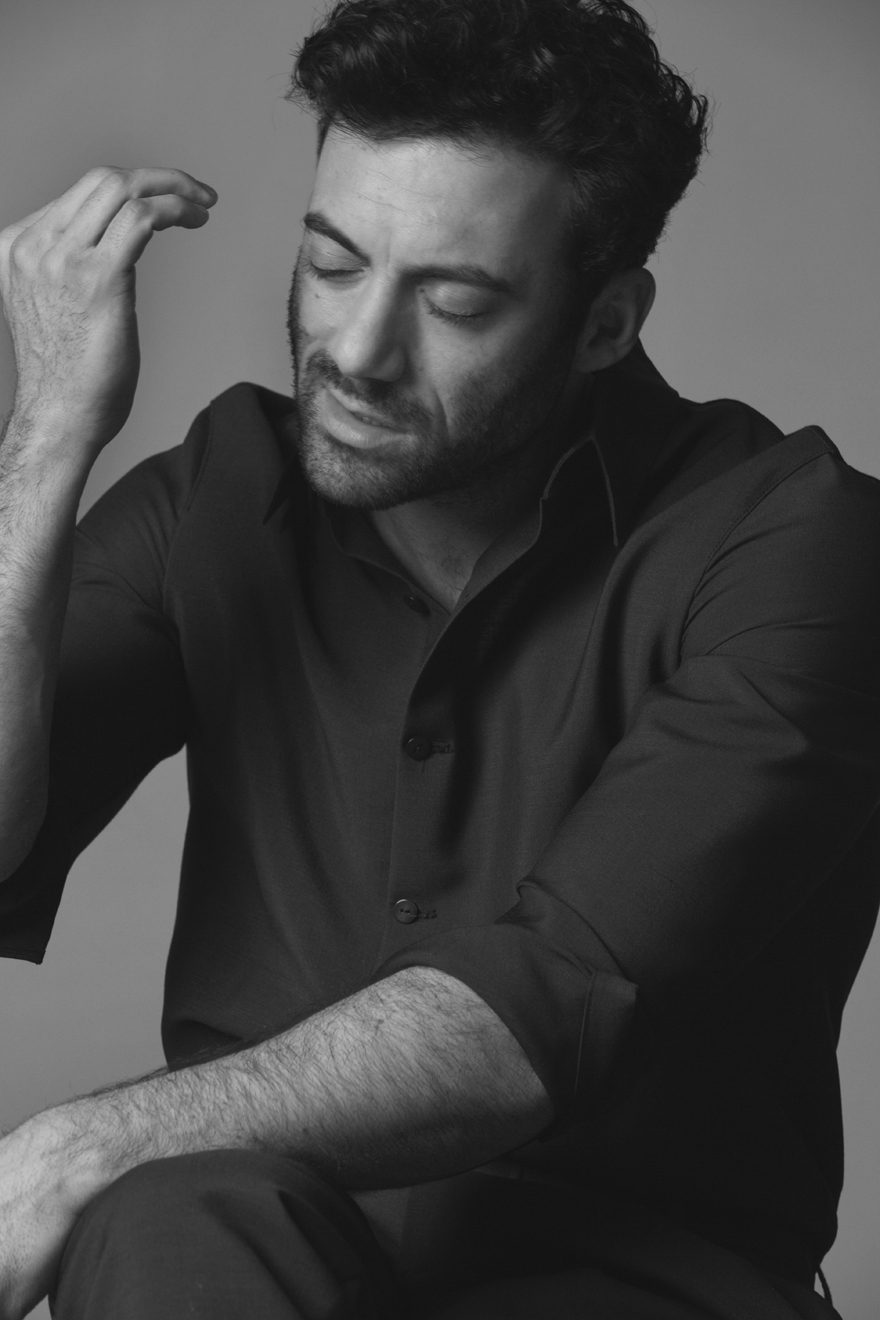 RK: The role of Rodolpho in the Broadway revival of Arthur Miller’s A View From the Bridge was really your theatrical breakout. It must have been surreal.

MS: Oh yeah, it was surreal…it really was. Being in that play, even having a 2-line walk-on part, I was overjoyed. With Greg Mosher directing, who had such an insane history of working with 20th century’s greatest playwrights, and Liev and Scarlett, I was already sort of blown away by having that experience. And as an understudy, you always have in the back of your mind, “what if I get to go on? What if someone gets to see me in this part?” And I kept working with the language and when this crazy thing happened and Santino got hurt—it was awful—they called me at 11am and said, “Hey, you’re going on tonight.”

RK: One moment you’re an understudy and the next you’re acting opposite Scarlett Johansson.

MS: Right! And of course, she is so busy that we had barely spoke to each other. It was like, “Hi, nice to meet you. See you on stage this evening.” [Laughs].

RK: Was that a good experience working with her?

MS: As you can imagine, I was scared. I had never been on Broadway, I had never been in that kind of environment with those stakes. I just remember there was this moment right before we were going to enter, and she just reached over and grabbed my hand and just held my hand until we had to walk to the door. I dunno, it was a very kind thing to do. I’ll always remember it.

RK: Can you talk a bit more about your role in Permission?

MS: I’m playing a contemporary hipster gay guy living in Brooklyn. It was fun, indie film for me. I think Permission is a really exciting story because more and more, people are kind of abandoning or at least deeply questioning, these kinds of conventional norms when it comes to romance and relationships. It seems like so many people have had experience, or at least moments, where they say, “Okay, this relationship isn’t working out, maybe we should open it up or try something else,” but there’s a whole different vocabulary now for the things people do to try to save relationships, to stall when they are trying to break up. I think this movie is evidence of how much we are all trying to work through this new moment in romance and love. There aren’t really rules anymore. I think people are more willing to accept more versions of how people want to organize themselves in that way.

I think it fairly represents the difficult and positive aspects of the experience [of open relationships]. Even for people who may not be so open to it, they might consider the ways in which it could serve them. When you’re talking about monogamy or not, it’s really like two different sets of problems. Not like one is better than the other. They each have their challenges, and you just have to figure out which challenge is good for you.

“for the best writers, the language itself implies a physical life. I think it’s also incumbent for an actor to find that themselves”

RK: Is physicality an important part for you in roles?

We also just watched All That Jazz the other night, I had seen it before. But the way Fosse shoots actors, the way he captures bodies and space, because he’s a dancer and has that sense of physical dynamism, every shot is full of movement, life, and rhythm. It’s incredible. I should’ve been a dancer [Laughs]. 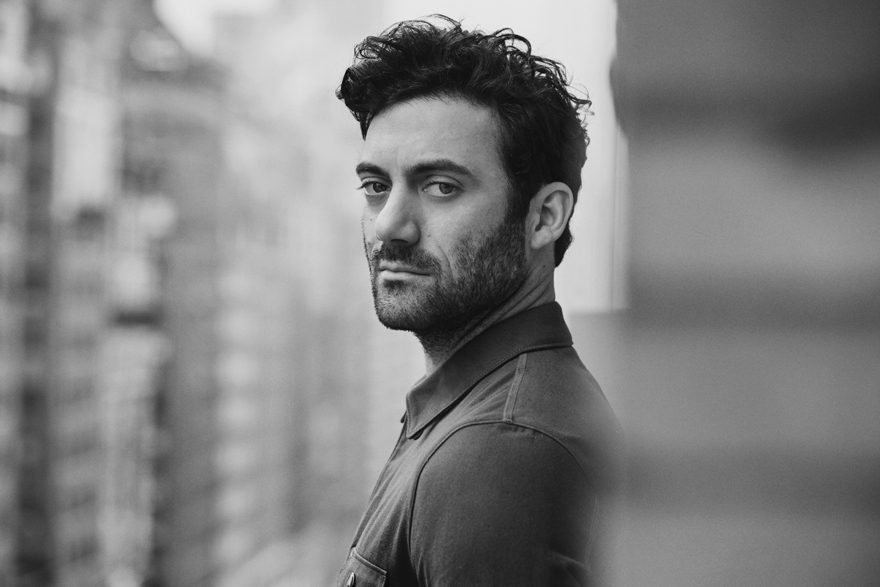