Helmut Newton liked describing what he did for companies like Mario Valentino as “prostitution.” But his ads were art, & gave a brand new meaning to “have a Nice day!” 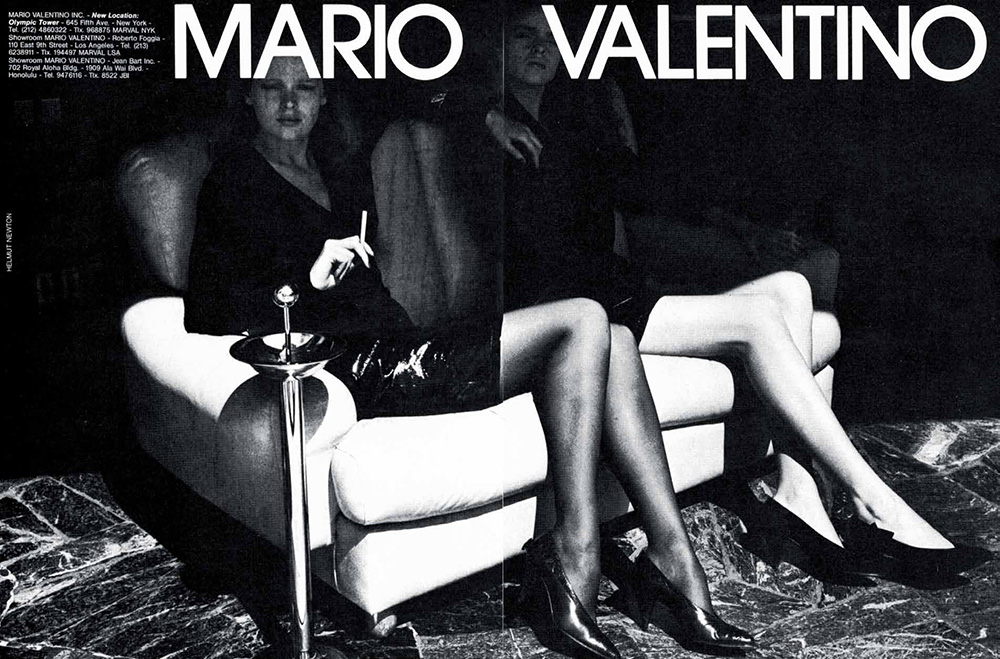 In the beginning, there was only one Valentino. Not Valentino of the startling but stylish screaming red cocktail dress. But Mario Valentino, the son of a Neapolitan cobbler who made elegant bespoke shoes for Italy’s King. Both had shrewdly mounted their conquest of America early in the 1960s by personally cultivating and gaining patronage from our First Lady, Jacqueline Kennedy—although this only added to the perennial confusion about who was whom.

But Mario was first. Reserved, conservative. He was in many ways the polar opposite of his namesake. Indeed, if not almost invisible, certainly someone who sought shadows in preference to the limelight. And even on his factory’s shop floor, photographs show him in business suits of somber cut wearing white shirts and dark ties. In the few interviews he granted, he enjoyed describing his role in building one of Italy’s most successful luxury fashion empires, between 1952 and his death in 1991, as akin to being the conductor of a symphony orchestra. Fashion world insiders, on the other hand, often dismissed him as a “business man”—an injustice in at least two ways.

First, because Mario was remarkably foresighted as a patron with an unerring eye for talent—willing to stand behind his choices regardless where they might take him. This even if, or particularly when they were rebels in- tent on breaking taboos, erasing the old boundaries, and creating a whole new set of rules. He was, moreover, no “bean counter” of the current school, cynically looking at the next quarter’s bottom line, plotting ways to eliminate “redundancies” or move production “offshore.” Materials were the finest obtainable. Workmanship impeccable. Design could be both bold and innovative, though it had to be elegant, refined, and sometimes understated. Finally, everything Valentino created was produced by 500 workers under his own watchful eye in Naples.

As for those who found a place at Mario Valentino (often at a critical junction of their career), Karl Lagerfeld became a freelance shoe designer for the company shortly after fleeing the stuffy Paris couture house of Balmain to seek the glamorous new world of ready-to-wear that began booming in the early 1960s. And by 1971 Lagerfeld had created a sensation by pushing the limits of quite how tall high heels could be—with a two-tone suede, peep- toed sling-back (featuring ankle ties that resembled sneaker shoelaces), topping the 5” mark. It is difficult to know how seriously to take the alarm sounded by Milan’s fashion press that the shoe posed a peril to women’s health, but there’s no question that it created buzz. Meanwhile, in 1969, as the company began to expand from shoes and leather coats, and create what would evolve into audacious all-leather ready-to-wear collections twice a year, Roberto Cavalli joined Valentino to develop new methods for printing patterns on leather. 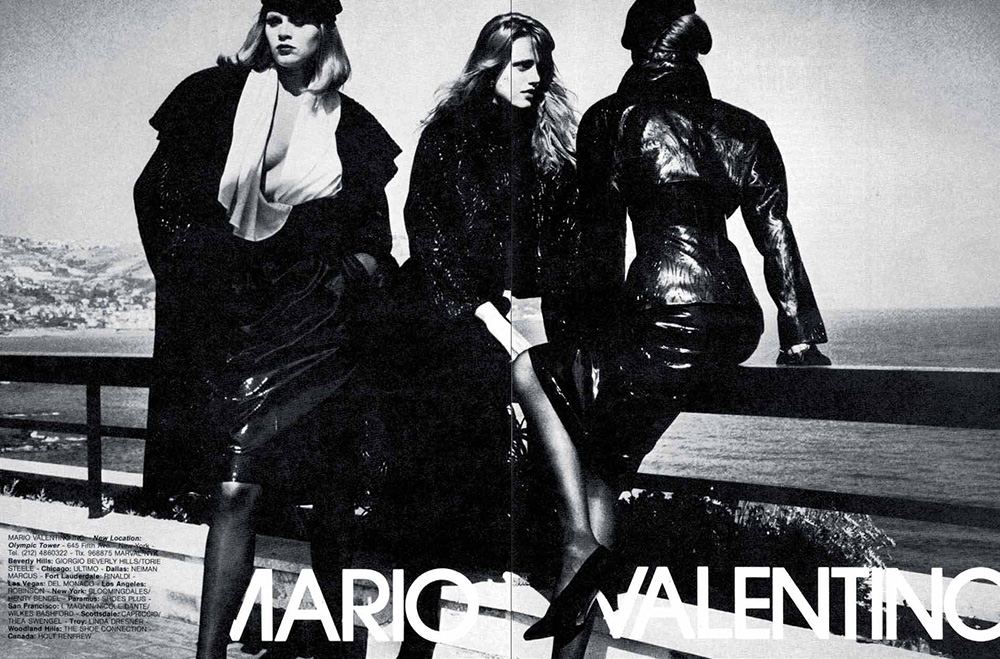 A decade later, Giorgio Armani became principal designer of Valentino’s all-leather collections (hailed by Bernadine Morris as “one of the marvels of the fashion world“). And when Armani departed, his replacement was Gianni Versace, a rising talent in Florence.

But the company also began to hunt for another sort of talent in the early 1980s, as their approach to marketing changed: photographers. The company was, without question, doing everything right. They were darlings of the fashion press. Both shoes (representing 80% of the business) and clothing sold well, while staying ahead of the pack as trendsetters. And over the next ten years, Valentino retail shops would be opened at all the

best addresses in all the right cities, including Milan, Rome, Capri, Paris, New York, and Hong Kong. The fashion community liked them, and word of mouth among Italy’s influential aristocratic circles of ladies who lunched remained strong.

Admittedly, the company needed a little time to find its feet in this comparatively early period of global mass branding. But their first steps cannot be faulted for Mario’s choice of talent: Richard Avedon for the Fall/Winter 1980 collections, Francesco Scavullo in 1981, and finally, three years later, Robert Mapplethorpe. At some point (probably briefly) Guy Bourdin shot for Mario Valentino (but perhaps rival Charles Jourdan’s patronage of Bourdin may have complicated any potential ongoing relationship).

And so, in 1985 Helmut Newton and Mario found each other, and for the next decade and half, Newton seems to have been the only photographer they employed for the lavish, often black and white photo spreads that ran regularly in French and American Vogue. Afforded what must have been largely unfettered discretion, most of Newton’s shoots took place along the beach promenade at Nice, and featured women, impeccably but inappropriately dressed. Sometimes they were perched on a crumbling cement bulk- head, or posed awkwardly on one of the bay’s stony public beaches, in early morning winter light, when the sky was gun metal gray, the beaches empty, and the sun cast long crisply defined shadows.

According to several fashion models who worked regularly with Newton at the time, he knew what he wanted, you did what he said. And “no” was not an option. Usually, he was polite.

Some of us though regard Newton’s most evocative work as that in which he confronts the forbidden head on—unapologetically conveying his trade- mark relish in voyeuristic pleasure. Someplace behind closed doors. On a vast, freshly rumpled bed or the balcony of a grand hotel in Paris or on the Cote d’Azur. Capturing a moment when the intruder is greeted not with alarm, but unperturbed indifference, and nearly everything about the moment screams ambiguity. In so many ways, if you removed the Valentino company logo and the Vogue slug, the two women on a sofa are a pitch-perfect work of Newton’s art. Consider, if you will, the unlit cigarette, the ridiculously phallic ashtray, the subtle luster of the love seat’s leather. Look at the demure neckline of what appears to be a man’s black cashmere pullover, the crinkly sheen of the patent leather miniskirt, the shoes, and the stockings. And above all, notice the placement of the hand of one woman on the other. Poised, her arm relaxed—gently grazing a breast (or not). The two women look your way in concert. Though shadows makes it difficult to decide if theirs is a human gaze or a marble one of Venuses or the Graces. But, the tilt of the second woman’s head raises your hopes for a moment. And you try to decide what you are going to say.